Wayne Homes definitely deserves a lot of credit for the job they did with my house, and if you’ve been following my series on building a new house you may have noticed some of the great things I liked about the building process.  In fact Wayne Homes has been building houses for 40 years and won the National Housing Quality Award in 2010 and now again in 2013 for the outstanding quality they give to their customers, and I totally have to agree.  I’ve never come across a builder quite like this one.

So before you consider another builder here are the reasons I chose Wayne Homes.

The first thing I like was the website.  After being referred by my brother to check out Wayne Homes the first thing I did was check out their website to learn more.  One thing that amazed me about their site was how much detail they covered on the house plans, in fact I could even see how much the basic cost would be.

On top of that I could even customize floor plans, do a virtual tour, see how their process works, and even talk to a live person via a chat session.  In fact this is exactly what I did when I was getting started. 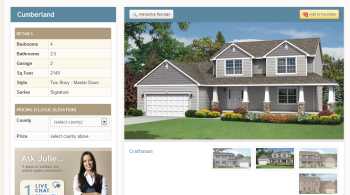 The second thing that I liked so much about this company was the fact that they had so many floor plans to choose from.  One of our big stipulations up front was that we wanted four bedrooms in the house with three of them upstairs and the master bedroom downstairs.  The great part about Wayne Homes was that they took a lot of the design work out of  the house for us.

For example we chose the Cumberland house design through Wayne Homes and it had almost everything we were looking for.  On top of that we could customize it literally any way we wanted, and still the house we wanted.

The second thing I found so great about building with Wayne Homes was how fast they moved.  From the day they started till the day they finished it took only three months for them to finish my house.  That’s moving.  I compared a few other houses in my area that started at the same time and all of them are still not even close to being done.

What made the process go so much faster is the fact that they had a well defined system in place along with individual crews hired to complete each task.  For example, one crew would take care of the cement work, while another crew would frame the house, another crew would hang the drywall, speeding up the entire process.  So if you don’t want your house to take 6 months to build Wayne Homes is the place to go.

Probably the biggest stipulation with building that I had was the cost to build and Wayne Homes came through in fine fashion with us.  We had a budget and they worked with us keep to it and not go over.  In fact, Wayne Homes even gave us a $14,000 discount, which I will have to say if it weren’t for that discount we probably would not have been able to build.

On top that they also had a price for everything, and not just a round about number but an exact price.  I remember when we were going through the design process and we decided to add an extra 6 feet on to the garage and they had a price for me right away.  Finally, once my plans were finalized they even gave us a binder that broke down every singe cost involved and told us everything we were going to get so their would be no surprises.

Fourth on my list is the Warranties they give you.  When you’re building a new house one of my concerns was what do I do I have problems with the foundation, or the roof, or the siding.  Is the builder going to stand by their work and fix it or are they going to say tough luck.

The great part about Wayne Homes is that they have a 10 year structural warranty  and a 2 year fit and finish warranty.  So if I do have problems with my house all I have to do is give them a call and it’s going to get taken care of.

Easy To Work With

Another thing I found very helpful during the building process was the fact that they were so easy to work with.  From the lot manager to the sales reps at there Bowling Green Office they made the process so easy for me.  If I had a question or an issue with something they were always their to help me out.

I remember in one case were I was having trouble getting the gas company to come out to install the natural gas lines and my lot manager ( Teric ) called them for me.  Whenever I had a problem all I had to do was just give him a call and in some case text him and their were no questions asked, he took care of it.  Looking back on that I don’t know how I could have got things done without his help.

One thing I know  I was curios about was the quality of the houses they built.  One thing I noticed about a lot of builders was the fact that their is no way to see the quality of their work.  However with Wayne Homes they do open houses which allowed me check out a house while it was in the building process, to see exactly what goes into building a house.

On top of that they also had three show models located at there Bowling Green location, which also made it nice to see the kind of craftsmanship was going into these houses, and it was amazing.

One thing that I didn’t realize they did was clean the house.  Once everything is done they actually have a group of cleaners come in and clean almost everything from the carpet, to washing the windows.  I have yet to meet another builder who does this and puts this level of effort into their houses.

On top of that while they are building the house each crew that comes in cleans up the mess they made before they leave.   In fact Wayne Homes brings in a large dumpster to throw all the scrap and junk into.

Finally, the last reason I chose Wayne Homes is because they have a very simple process they follow.  In fact, when you’re first getting started Wayne Homes gives you a complete binder that covers ever last step you have to go through, so your’e never left guessing what’s going on next.

This also goes with the payment process as well.  Once the construction loan was closed we only had to make 5 installment payments while they were building the house.  In fact, they would even send me a notification when the next payment was due and how much it was going to be. In the end this took a lot of the guess work out of the process and made my life a lot simpler. 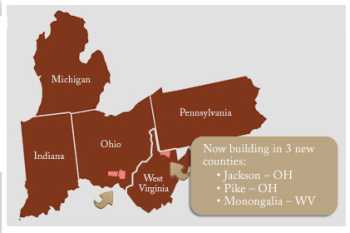 As I wrap up my review on Wayne Homes you might be wonder if this is still for you, and where do I get started.  So here is a small list of steps to help you out.

Wayne Homes is located and has several Model Centers in Ohio, Pennsylvania, Michigan, Indiana, and West Virginia.  To learn more you check out a list of their locations here.