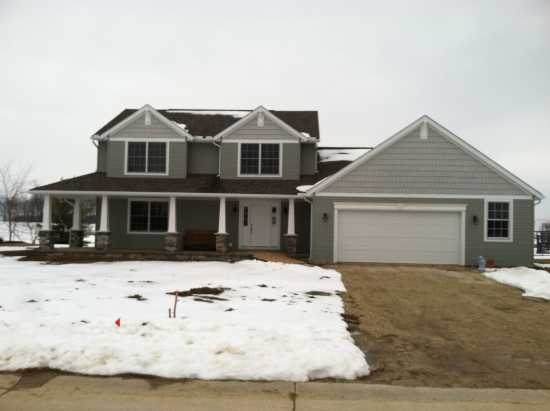 Well, here we go again, week 5 in my real estate series.  If you haven’t had the chance yet to read the other article in the series I highly recommend you do.

I know I’ve been getting a few comments on how helpful they’ve been for others and I’m glad it’s helping.

I know there have been many times where I wish I had the info I know now because it could have helped me save just that much more.

So check out the first 4 weeks in the series below

So in this week’s article, I’m going to take it a step further on the building process and talk about new home upgrades to consider.

When it comes down to its upgrades are the special little things that you can do to your house to make it more of your own.  Some of these things will be more seen and some will be hidden but very helpful.

Here are some of the ones I’ve made.

#1 Get A Bigger Garage

One of the first things that were suggested to me by a family member was to increase the size of my garage.  At first, I was kind of against this because the garage was a full 2-car garage plus it also had an extra 9-foot by 9-foot nook in it.

However, when I started considering all the extra stuff I had from tools to the kid’s toys I decided to look into it a little further.

When it came down to it, adding an extra 6-foot extension onto the garage was only going to cost around another $4500, which I thought was very reasonable considering to add an entire 3rd car garage was going to run around $11,000.

#2 Get A Bigger Garage Door

Second I suggest getting a bigger garage door.  This is actually one upgrade that I didn’t do but kind of wished I did.  Currently, our garage door is 16 feet wide, which is fine if you have smaller vehicles.

In my case, I drive a truck and my wife drives an SUV, neither of which vehicles are very small.  If we had two cars or even a car and a minivan this would be a totally different story.

My suggestion is to go with an 18-foot door or two separate opening doors this way you will have more room to open your car doors and not hit the vehicle next to you. If you don’t have enough space at the front for a wider door, consider converting to one of those side loaded garages to fit the door lengthways if you have the space for it.

The next new house upgrade that I did was put conduit on my electric lines.  This might seem kind of odd but in most cases, electric lines will be buried in your yard and run from the street and hook up to a meter on your house.

So when you’re building your house you basically have two options when installing your electric lines.

The first is to do what is called a direct burial.  This is where they trench a hole through your lot and the electric company comes and buries the line with no cover to protect the lines.

The second option is to trench the hole and put the conduit down, which is basically a plastic tube, that will protect the electric lines from the natural elements.

On top of that if the lines would ever happen to go bad they won’t have to rip up your yard to install the new ones because all they have to do is slide the new lines through the tube and it’s done.

The next thing I suggest is that you get a basement.  The thing I like about basements is that they give you all kinds of extra space for storage to living space. My house has a full basement which isn’t even included in the 2150 square feet of my house.

On top of that down the road, we plan to fix up the basement as an extra place for the kids to play and to put an office down there.

Finally, the majority of the basement will be used for storage for things like the kid’s clothes to the Christmas Tree.

Now if you are considering a basement there is defiantly one upgrade that you must consider that is well worth the money and that is to have a fire escape window.

The one thing that scares me more than anything is that there is only one way out of that basement if there would happen to be a fire and if that way is blocked there is nothing they could do about it.

I would hate to think that my kids, wife, or anybody else’s life could have been saved only if I would have spent the money on a fire escape window.  I don’t think that is a burden anyone would want to carry and it was only an extra $300.

With all the things to be cheap about when building your house, this is defiantly not one of them.

#6 Full Or Wrap Around Porch

Now one of the best home upgrades I added was a wrap-around porch.  This is probably the one thing I splurged on when building my house and with good reason too.

I like wrap-around porches because there’s nothing better than kicking back outside on a nice spring day with a light breeze hitting your face, sipping on a cold beer, and watching a thunderstorm roll in.  At least for me.

On the other hand, I also feel a porch can really tell a lot about someone.  I feel a more open porch such as a wrap-around feels more inviting,  open, and friendly, while smaller and in some cases hidden porches feel less inviting and closed off.

I’m not saying one is right or wrong but that’s just the impression I get.

Another one of the best home upgrades for the money is to add custom lighting.

I know I talked about this in previous articles but you’ll defiantly be thankful when you have those extra lights in your closets and hard-to-see places.

On top of that, I also added extra can lights on my wrap-around porch, because what’s the use of sitting on a porch when you can see anybody.

In the end, it cost me an extra $1100 in lights, switches, and outlets but it defiantly will be worth it.

Number eight on the list is a keypad entree.  I’ve never had one of these until I moved into my rental house and I can tell you it has been very helpful to have.

In my old house, I got locked out a few times with no way in and had to climb in through a window which the neighbors got a good chuckle out of.

However, with a keypad entree, I won’t have to worry about that issue anymore.

Next on the list for new home upgrade tips is to insulate, drywall, and paint the garage.  At first, I was kind of against this idea but once I saw the final coat of paint I knew I had made the right decision.   The reason I liked it so much was that I could heat the garage just like any other room in the house.

The benefit to that is if I plan to have a bigger party it will give me the extra space I need.  In fact, my garage is big enough that I could have family parties, to my kid’s graduation parties in there.

On top of that if I would have to work on something in there in the dead of winter I could heat it so I wouldn’t have to work out in the cold weather.

Finally, the last of the new house upgrades is to have walk-in closets.  One of the things we liked so much about our house plans was the fact that nearly every bedroom had a walk-in closet except for one.

On top of that, we also have a pantry in the kitchen which will defiantly help for storing everything from flour and sugar to mixers and blenders.

However, the need for more closet space didn’t really become a concern until we bought our first house and realized we didn’t have hardly any room to store stuff.

On top of that, we also added extra storage racks to stack stuff upon which would allow us to hang most of our clothes and not have to have them laying on piles in our bedroom.

What New Home Upgrades Are You Considering?

In the end, I feel the best way to know what kind of upgrades you really want is to buy a house before you build one.

This way you can see where you might be falling short on something like extra closet space or things that would be nice to have such as a wrap-around porch.

So what kind of new house upgrades are you considering?