Currently,  I’m in the process of building a house and if you’ve ever gone through this process you probably know exactly what I’m going to be talking about.

However, this article isn’t for those who have already built a house but those that have not.

So in this article, I’m going to ask the question, is building a house worth it, and cover some of the challenges you may have not considered when building, and give you a birds-eye view of some things I dealt with while building my house and how I overcame them.

Buying Instead Of Building

The first thing I had to decide before I even considered the idea of building a house was if buying an older house would be a better route to go. Buying a house could save me countless headaches and a ton of money in the process. Unfortunately, the town I live in doesn’t have very many options.

Working with a professional builder such as Coral Homes can alleviate some issues, and open up more options for you. These kinds of professional home builders usually have ready-built homes available for first-time buyers and investors alike located in affluent or desirable areas.

I would recommend that should you not have the patience to build your own home or the difference in price isn’t going to be much, it might be a better choice to forgo the dream of building your own home and leave it professional.

Most home builders already own display homes and even entire villages that you can visit in order to get a sense of what their capabilities are and deals can always be worked out; maybe a better option if it is your first house.

My first house had around 1500 square feet with 3 bedrooms and one bathroom which wasn’t that bad but the problem is almost all the other houses in town were exactly the same so it wasn’t worth selling my house and switching to a house that really wasn’t all that much different.

Another thought was to move to a different town but the problem with that is we really liked the school district and the atmosphere of the town.  On top of that, we have some really strong ties with family and the town we live in is a great central location between family and work.

In the end, if we wanted to continue to stay living in our current town we were going to have to build.  On top of that after running several quotes and estimates the cost difference was only around $35,000 different.  So if you’re wondering should I buy or build run an estimate with a builder to see what kind of cost difference there really is.

The second issues my wife and I faced were are nerves.  I can’t really explain it but building a house is very nerve-racking and stressful.  I can tell you first hand I was nervous every single day and I probably couldn’t give you a valid reason why.

In fact, I remember it keeping me up at night worrying about all sorts of things from trenching the sewer line into painting the walls, to handling the financing.

On the other hand, we were also very excited.  It was awesome to see our house take shape right before our very eyes.  From them digging the basement to pouring the walls, to framing the house, it was exciting to see them construct something so massive from literally nothing.

In the end, it doesn’t matter how prepared you are but you will still get nervous.

Another thing you will have to deal with is the unexpected cost.  When it comes to the house there were all sorts of costs I didn’t consider from blinds for the windows, to cementing the driveway, to extra lighting, switches, and outlets, but those weren’t the cost that scared me.

The cost that really scared me while building our house were the ones that didn’t even relate to the house such as the $800 in new tires and vehicle repairs, and $3500 in medical bills due to the fact that my second oldest son had tubes put in his ears.

In the end, I know we’ll get these extra bills paid off but know things can get very stressful at times.

One part of the process that I never thought would be a problem was when people started suggesting different things we should do with our house.  Now I have to admit some of them were really good.  One person suggested adding an extra 6 feet onto the side of the garage which would give us a little extra room and it was only an extra $450 to do it.

Then things got a little more out of control. People were giving us suggestions that were more like demands and telling us we have to build our house a certain way.  On top of that, these people were going behind my back telling others I was not doing things the way they had suggested.

That’s when I had enough of it.  Now I have to admit it got my blood boiling at one point and  I had told a few people to back off, but once I set the boundaries the rumors and suggestions died off.

In the end, it all worked out but one thing I defiantly suggest is that you give others boundary’s or they might just walk all over you.

It’s Not A Pretty Process 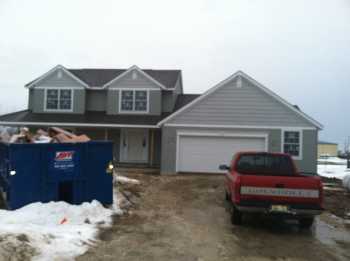 Finally, the last challenge you need to be prepared for is the fact that it is not a very pretty process to build a house.  Now I have to admit our builder has a well laid out process and knew exactly what they were doing but even at that you’re going to see things and wonder how this is all going to work.

In fact, if you would look at my house to the left you would see six-inch ruts through the yard from the cement truck pouring concrete, a dumpster full of junk, and in the back yard, I have a 12-foot mountain of dirt.

On top of that, you have to consider all the things you have to line up.  For example, when I had to get the gas lines installed it took me a week just to get them to send me just the right paperwork and another 20 days just till they came out to install the lines.

In the end, I know that some things may not look so pretty while your building your house but know that everything will work out in the end.

Is It Worth It To Build A House

When it comes down to it with all the challenges I faced it was defiantly worth it to build the house.  By building a house we got exactly what we wanted and more.  However, I would have to say that buying a house is still a cheaper way to go but if the cost difference isn’t much different as it was in my case you may want to consider building a house.

So what are your thoughts, is building a house worth it or not?  Share your comments, thoughts, and ideas below.