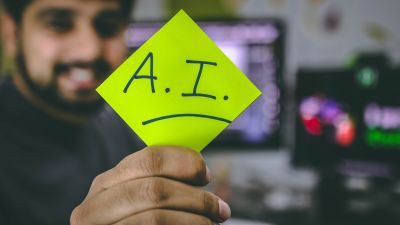 If you check your phone, you’ll notice that your camera is most likely AI-powered.

Some of the leading media corporations, including the Bloomberg News, The Washington Post, and The Associated Press, have been automating their content output with the help of robot reporters capable of churning out hundreds of reports and articles that don’t require creative work or critical thinking.

We also witnessed the “birth” of the first social humanoid robot, Sophia, back in 2017.

Does this mean that we’re on the cusp of becoming an AI-based society?

Despite the fact that this abbreviation has become a buzzword in many industries, the truth is that we still have a long way to go until we reach this concept.

What Is Artificial Intelligence?

Although most people imagine AI as super-intelligent and powerful robots that will first take over our jobs and then stage an entire takeover, this scenario is still something that belongs to sci-fi blockbusters.

However, we’re undoubtedly talking about a multifaceted technology whose potential will change our life, hopefully for better.

But, it’s impossible to cover this topic without mentioning four different types of artificial intelligence.

These are the most basic AI systems and can only react to an existing situation. In other words, they can’t form memories, learn from past experiences, or perform any task that a human being can, so this type of AI is a far cry from the concept of artificial general intelligence (AGI).

With no or a very limited concept of the world, reactive machines can only deal with some simple tasks they’re trained to perform. One of the main characteristics of these systems is that they always behave in the same manner when they encounter the same situation. But this is exactly what’s expected of them – being trustworthy and predictable.

AI systems that use previously-learned information and stored data are more advanced than reactive machines. One notable example of this type of AI is autonomous vehicles. Driverless cars combine pre-programmed knowledge and limited memory.

It’s limited memory that compares external factors such as other vehicles on the road and their environment, and makes judgments and decisions that ensure a safe ride.

This type of AI refers to a decision-making ability similar in extent to those of a human mind. While there are some advanced types of conversational intelligence that exhibit some humanlike traits and capabilities, we still can’t talk about AI that has the emotional capacity to understand human feelings and thoughts and respond accordingly.

It can be said that intelligent machines still have to develop the ability for proper social interaction, and that would require them to adapt their output based on the emotional and behavioral shifts of the humans they interact with.

However, when it comes to business use cases, the fact that AI chatbots are always reliably polite and calm no matter how angry or unpleasant customers are is what makes them perfect support reps. That’s why they have become essential for providing stellar customer experience.

Sophia, the humanoid robot, contains certain elements of the theory of mind as she has a humanlike appearance, while neural networks and computer vision paired with image recognition allow her to see, analyze, and emulate social interactions and mimic human facial expressions. But, the results are somewhat unsettling and inspiring the uncanny valley effect.

This is the holy grail of AI scientists – creating artificial intelligence that’s sentient and capable of having emotions, beliefs, and needs. Unlike the theory of mind that focuses on replicating human emotions, behaviors, and practices, this type of AI strives to build a machine with a mind of its own.

For better or worse, we’re still perhaps decades away from this scenario. 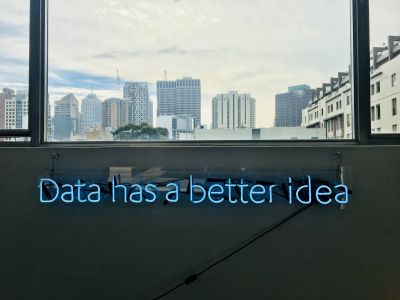 At this moment, one of the most commonly used aspects of artificial intelligence is its ability to handle massive data sets and make sense of them.

For example, the driverless cars previously mentioned heavily rely on the data fed into their machine learning algorithms, as well as the data they collect, in order to detect objects on the road, follow traffic rules, analyze their surroundings, and drive safely.

The quality of data is a crucial factor for the development of AI, and the trouble with this is that a certain portion of data has to be obtained from humans in manual code. In other words, it can be biased and not provide the whole picture.

Another issue comes from the fact that sometimes it’s impossible to collect data due to certain legal restrictions and confidentiality agreements.

Let’s say that it would be possible to find cures and vaccines for certain illnesses much faster with the help of this technology. But for this to work, all the data we feed into AI systems should be correct, complete, and accurate.

However, this usually isn’t the case because of the biased data problem as well as the fact that the people who feed data into these algorithms and train them might unintentionally create ill-defined problems.

Despite AI being at the core of many indispensable industrial apps, corporate leaders seem to be oblivious to this fact.

The truth is that top managers of many companies aren’t aware that AI is fundamental for the growth of their business, thus failing to see the need to add AI to their processes. That’s the main culprit behind a somewhat slow-paced adoption of AI.

In other words, since they don’t know that the tech their companies use is powered by AI, these managers don’t use its full potential. This issue could be solved by introducing experts who would collect and analyze relevant information, as well as produce feasibility reports for AI implementation and its benefits.

Many AI-powered systems come with a hefty price tag.

That’s why only big companies with sufficient budgets can think about implementing this technology.

Although AI can revolutionize business processes, save time, and ultimately cut costs, all these results are far down the road and won’t be experienced instantly. And many SMBs don’t have enough resources to wait for these positive outcomes, which is why they aren’t too eager to opt for this costly technology.

Artificial intelligence is something that will shape our future, but it’s still in its infancy. Due to a number of different implementation, development, and cost factors, we’ll have to wait until we can call ourselves an AI-based society.

But, like it or not, we’ll get there over the course of a couple of decades.