Many of you who have been around for some time on Stumble Forward know that by following my entire series on building my new house that it’s been a daunting project.  It’s been stressful physically, mentally, and financially.

In fact, as a direct result of building my house I’ve ended up with around $6000 worth of credit card debt from all sorts of unexpected bills.  Below is an exact break down of the two credit card debts that I have. 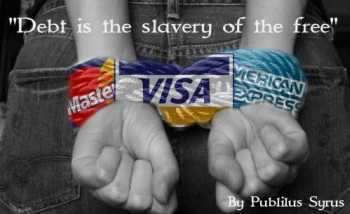 The problem with credit cards is that it can be really hard to stop using them once you’re so use to having them.  I kind of like to think of them like an addiction that’s hard to break, and that’s what I want to spend the rest of this article talking about, why it’s so hard to get out from under your credit cards.

Uncertainty.  One of the biggest problems I’ve faced towards paying off my credit cards is the fact that I’m going through some very uncertain times financially.  Most of this is due to medical bills with my kids.  My second oldest had tubes put in late last year and it cost us around $3500 in medical expenses.

To boot my oldest child has issues with his ears as well and may have to have tubes as well.  We’ve been doing almost everything we can to prevent this from happening from going to the chiropractor to using an unique product called the Ear Doc.

On top of that my health insurance has a $3500 deductible with an 80/20 coinsurance with no drug card or doctors copay, which means I basically pay for everything until I hit my deductible.  I’ve been looking to switch plans but the problem is since my oldest child was recommend to have tubes the health insurance quotes have been running anywhere from $800 to $900 a month.

Finally, the cost to buy medication for my oldest child since I don’t have a drug card is very expensive.  I bought one prescription of Nazonex and it cost me around a $150.  Add up a few bills like this and you’re talking about a lot of money.

When it comes down to it unplanned medical bills have been the real culprit of my problems and until I can manage to solve this problem it will take me more time to payoff my credit cards since I’m not able to put as much towards them.

Dependence.  Another issue I see with credit cards and why it’s so hard to pay them off is dependence.  Their are several things my wife and I have grown accustom to when it comes to credit cards.  The first is using are gas card. We us to use cash when buying gas but this was so tough with fluctuating prices.

One week we might need $40 or $50 and the next week it might be $70 or $80.  With a gas card it eliminated the whole cash mess and we stickily used it for buying gas, until it came time to buy a few appliances which we needed for the house.  Now it’s gotten to the point where we are paying off enough to cover our cost for gas each month but we still have a $4500 to $5000 credit card bill at the end of each month.

The other problem we face is that we have a few reoccurring payments  on the other card.  However, I’m working to move these payments to some other location which I will cover more in the next part of this article.

Ease Of Use.  Finally, the ease of use can also be a problem as well.  I run into this problem mostly when I’m in a pinch and need a way to pay for something.  This has been happening less and less lately but it still does none the less.

For example, the other day I was looking to buy a 4×4 post for my mail box and I realized I forgot my checkbook and I had no cash on me.  This left me with a dilemma, do I drive 10 miles back home and get my checkbook or do I just use my credit card.

I’m sure some of you may have been in that situation before, but just because of all the issues I’m facing right now doesn’t mean I still couldn’t pay off my two credit cards and still eliminate this debt in short time, I just need to change the way I’m doing things a little.  After all, I’ve dealt with far worse debt problems than this before.

How To Fix The Problem

When it comes to paying off your debt a lot of us, me included, often think all we have to do is put a simple debt plan together such as the debt snowball or debt avalanche plan together and things will be be alright but as you can see with the issues I’ve covered above this just isn’t true.

Below is a step by step plan I’m using to pay off my debt.  If you are finding yourself in the same situation hopefully this may help you with the progress of paying down your credit card debt.

#1 Stop Creating More Debt – The first step is to stop creating more credit card debt.  This may sound simple but when you’ve spent a  lifetime of dependence on them it can feel really tough.  If this is really tough you may need to take some extreme measures and cut them up altogether.

#2 Move Reoccurring Payments – The next step I took was to remove or get rid of any reoccurring or dependent payments.  A few ways I’m going about doing this is by using a checkbook, a debit card, and one of my favorite options, Paypal.  With Paypal I can pay bills and the money taken directly out of my Paypal account and not put on a credit card.  As for my gas I’ve been resorting back to cash but I’m looking at getting a debit card.

#3 Focus On One Debt At A Time – Finally, the last thing I am doing is focusing on one debt at a time.  In my case I’m paying off the debt with the least amount owed, so in this case I’m focusing on Credit Card Debt #1.  This debt use to be around $1500 but I’ve managed to pay down $500 of this debt so far in the last few months, and in the next 2 to 3 months I should have this debt paid in full leaving me with one credit card to go.

With so many hurdles to jump when it comes to paying off your credit cards it’s no reason for you to give up.  Instead do like I did and break the situation down to it’s core problems and solve each one individually.

So what problems do you face paying off your credit cards?