I know what you’re going through; back several years ago I was facing some of the same issues. I had debt racked up full on two credit cards; I had a mortgage to the hilt, a car loan and a home equity line of credit to boot.

As bad as all of that sounded I didn’t give up.  Don’t get me wrong I knew my situation was bad but if I was going to change my future I knew it was up to me  alone to do it.

In this post I going to share with you five tactics I used to get back on track and get out of debt.

You Need A Budget

Yeah, that’s right I said you need a budget.  I want you to look me in the eyes, uh I mean computer screen, right now and tell me that you have a fully functional budget up and running.

This is the first I did.  There are a ton of reasons you should have a budget in place and I didn’t have just a piece of paper with a few number scribbled on it.  A budget should hold a high value to you.

To get started you need some type of budgeting program.  There are a ton of them out there however I’m not a high tech type of person so here is a simple budget program I use that can help you get started.

This budget is fairly simple to use.  So download it right now and get started, if you have Microsoft Excel it should open up fairly quick. 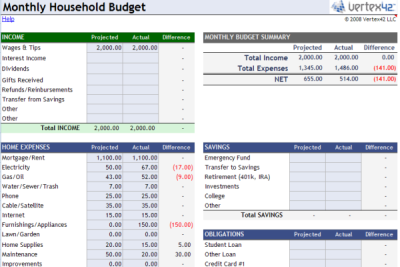 Alright, do have it up and running?  If not do it now, what I’m about to go through now will show you how to set up a simple and effective budget now.

The next thing I did was I decide to cut fat out of my financial diet.  However this wasn’t going to be easy for me.  To do this I was going to have to sell some stuff that I was very emotional attached to.

The first to go was the two snowmobiles I owned.  Not only was it tough but I caught some flak from my family.  They’re big time sledders and thought I was crazy to sell my sleds.  However, by selling the sleds I was able to start an emergency fund and what I had left over went to help pay down credit card debt.

I also play guitar and accumulated a lot of gear over the years from playing in bands and brought a few things up to the local music store to sell.  I sold a lot of other odd and end things but those were the big things.  That money went to a great use and helped me get back on my feet.

Now I know that everyone does not have a couple of snowmobiles to sell like I did but I’m sure if you’re like most people you could find even just $500 worth of stuff around your house to sell.

So right now start compiling a list of things you could sell.  Go through old closets.  If you have a lot of stuff you might want to have your own garage sale or maybe you might be able them to a local consignment store in your area.  Every little bit helps especially in the beginning.

Finally, if you want to learn more about being a minimalist check out my good buddy Brad at Enemy of Debt, he is the true minimalist.  He has an incredible story so check it out.

After I had a solid budget together and sold a few things I decided to take everything to the next level.  I knew if I was going to speed up the process I had to fix some of financial issues I was having.

The first problem was I still had a home equity line of credit with over $7000 of debt and a 12% interest rate to boot.  The second problem was I had a mortgage that was a disaster.  I’m not going to go in depth about that here but you can read more about my mortgage disaster here.

To solve this issue I needed to refinance and consolidate my debt and this is exactly what I did.  I usually don’t recommend this option for a lot of reasons but in situation it did a few things to help me out.

As good as those benefits were I still had the fear of falling back into debt.  However this was more of a last ditch effort for me, luckily it all worked out.

The next tactic I used to slash debt was paying me first.  The truth is you have to save money, not just some of the time or when you feel like it.  You have to do it all the time.

The reality was every time I paid off a good portion of my debt I would somehow sink back into debt, and every time I did this it got worse and worse until I had an epiphany.

The problem was I was focusing too much on the debt.  Debt is a negative term no matter how you look at it.  So what did I do, I started focusing on saving my money rather than spending the money on debt.  I started saving $50 a month back into an emergency fund.

Doing this had a huge effect on my life.  Instead of sleepless nights wondering how I was going to pay next month’s bills I started getting better sleep and worrying a lot less.  It’s amazing what an extra $1000 bucks sitting your bank account will do for you.

I Changed The Way I Think

Finally, I changed the way I think.  This was probably the hardest thing for me to do of the five.  The problem was I saw myself as an average guy, with a wife, two kids and a whole lot of debt.  I thought this was the way things worked.

The reality is life is kind of like a thermometer.  Let’s say you live life at about 85 degrees, this is where you are comfortable in life from everything to the type of people you associate with, the food you eat, and even the way you handle your finances.

Now let’s say life has given you 105 degrees and you’re up for a promotion at work and it seems everything is clicking into place for you but then you realize that you are comfortable living life at 85 degrees and slowly you begin to fall back to 85.  All of a sudden you get lazy and show up late for work, your finances begin to slip and you realize that you racked a lot of debt up last month on your credit cards.

Has this ever happened to you?

The reason this happens is because you are not willing to change.  However it can also happen the other way as well if you’re comfortable at living life at 85 and all of a sudden life has given you 65 you realize you need to change something, so you get into work 15 minutes early and watch over your budget much more closely and a month down the road things are back to normal.

Why does this happen?

This happens because we are comfortable with the way things are.  For most people this will happen their entire lives without ever taking notice of the endless cycles of ups and downs they’re going through.

So how do you break this cycle?  It’s actually quite simple.  You need to believe 105 degrees in where you feel comfortable.  I know that sounds easy to say but it’s true you have to be willing to change before change will take place.

One of the things I did to change was I took a part time job in financial services.  At first a lot of people thought I was nuts but I knew that if I wanted to lead a different life I had to change.  I started to associate with higher quality people who managed and used their money well.  After  a few months my finance began to get better all because I associated with people who took better care of their financial situation.

Try this simple little exercise right now, think of the 5 people you spend the most time with each day excluding your spouse?  Write their names down, and ask yourself these questions, what are these five peoples financial situations like?  How do they spend their money?  Finally, how much debt do they have?

I’m willing to bet their situation is pretty close to yours.

I know a lot of these tactics that I’ve shared with you may take a little bit to apply so I suggest taking them one at a time.  There is no way you are going to do all of these things at once.  Also if you’ve been in a situation where you owed more than you made I would like to hear your story and how you bet the odds.