When the pandemic first hit, people thought the property market would take a beating. The expectation was that the economy would tank, and so would the number of people looking to buy and sell homes.

And that’s sort of what happened during the first wave. Shelter in place orders meant that people couldn’t look around the houses that they wanted to buy, so the market came to a bit of a standstill.

Interestingly, though, prices didn’t go down as much as many pundits predicted. In fact, they roared back in many places, just like the stock market.

This event left a lot of people in the market scratching their heads. Why would prices remain so stable even though the market isn’t operating?

There are a couple of reasons for this. The first is that most sellers expect the market to return to normal relatively quickly.

Once a vaccine arrives, and public health can tackle COVID-19, we should be in the clear. It’s not worth taking a massive hit on the sale price of a home if waiting a year means that you can make a lot more money.

The other factor has to do with the fact that the disease is forcing a lot of people to move who wouldn’t have done so before. The disruption to the economy, family life, and jobs means that people are having to become more mobile.

And that means more transactions, which pushes up prices.

Remember, building has stopped, so the number of homes for sale is just the same as before the crisis. The difference is in the pattern of buying and selling.

We will likely only see a big change in the property market if the current situation continues for another year or so or if the vaccines don’t work.

When it comes to cities, there are winners and losers. Some are seeing the market thrive – others not so much. 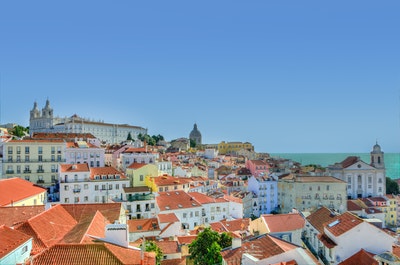 The capital of Portugal is currently experiencing something of a boom in its property prices. According to the data, prices are expected to rise in the city by an astonishing 6 percent, which is considerably above the inflation rate.

There are a couple of reasons for this. The first is that Lisbon is now widely regarded as one of Europe’s most attractive cities for tourists. It attracts millions of people each year, thanks to its incredible architecture and laid-back atmosphere. Its trendiness is one of the reasons it is now leading the charge.

The second reason has to do with the cost of living in the city. The price of living somewhere like London or Berlin is astronomically high right now. If you want to live comfortably in one of those cities, you have to be on a high salary. If you’re not, then it doesn’t work.

Lisbon is still very affordable. Local wages aren’t particularly high, so if you can work remotely, you increase your purchasing power.

Next on the list is Sydney – the largest city in Australia. Sydney is the country’s commercial capital and where most of the biggest companies locate if they’re not in Melbourne.

The main appeal of the area is the sheer range of activities on offer. Sydney is home to more than three million people and is the biggest place for thousands of miles.

Its property market is also booming. Average prices are set to rise something like 6 to 8 percent this year, depending on what happens with COVID-19, and another 5 percent next year if things go to plan.

The property market is booming in Paris right now, thanks to international interest in the city. Newly wealthy people in foreign lands are snapping up properties in the city at a rapid clip, pushing up prices.

Estimates suggest that the average cost of a home could rise by a staggering 4 to 6 percent this year, despite all the disruption we’ve seen.

Part of the upward pressure on prices comes down to planning laws. Zoning around Paris is very tight, and there aren’t many places left that builders can construct residential districts.

That’s leading to a bidding war, which is pushing up the cost of accommodation faster than the average salary is rising.

For years, Moscow was off-limits for property investors, but the city is changing. While Russia is still a risky place to do business, it is getting better, and foreigners have a lot more protection.

Prices for accommodation in the city are rising as fast as they are in Sydney. And that’s because the country seems like it is turning a corner – at least from a legal perspective.

China is currently going through the biggest rural-to-urban migration in human history.

More than a billion people are slowly making their way from rural communities to the big cities to find work and increase their incomes.

Guangzhou isn’t a well-known city in the west, but it is one of the largest in China, and its property market is booming. The massive influx of people is pushing prices up into the city.

There are cranes everywhere, but apartment building is falling behind, even with such frantic activity on the ground.

Prices in the city are due to rise between four and six percent this year, assuming that migration continues unabated.

Germany did a good job fighting the coronavirus and managed to keep its death rate much lower than other European countries. Therefore, the nation largely escaped the slump that we saw elsewhere where officials botched the public health response.

The property market in the city, therefore, is still doing well. While the gains haven’t been epic – like they have in Lisbon – they’re still decent. The price of an average property in the city is due to rise between 2 and 4 percent this year, putting gains well above the rate of inflation.

While it might seem like we are living through a period of crisis, there are winners and losers in any situation. And that principle applies strongly to the property market.