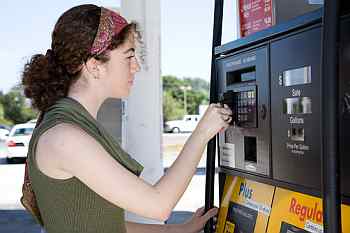 Using a credit card skimmer, a device attached to a point of sale card reader that reads and stores credit and debit card information, identity thieves can access victims’ bank and credit accounts.

These devices do not look or behave any differently than a normal point of sale credit card reader. If you think that you can spot the kind of tampering that indicates gas pump debit card skimming is taking place, you might want to think again.

Gas pump debit card skimming can be sophisticated on poorly secured gas pumps. A ring of identity thieves was recently apprehended after installing credit card skimmers on the inside of gas pump panels where they were out of the sight of consumers and gas station attendants. I think the most disturbing part about this particular incident is that no alarms went off when the thieves were installing the devices.

With new technology, these identity thieves do not even need to revisit the installed skimmer to retrieve card information and risk drawing attention to themselves. Wireless skimming, in which the card skimmer wirelessly transmits captured data to a laptop or other mobile device, is becoming so rampant that police departments are even investing in specialized equipment to detect this type of crime. Consider the following stories from real life victims of credit card skimming gas pumps that show just how unnoticeable these devices have become:

Just how common are incidents of skimming at gas stations? In an interview with the Salt Lake City News, California police Sgt. Troy Arnold indicated that “literally thousands” of credit and debit cards are skimmed in California alone every day, adding, “Unfortunately, it’s becoming common practice.” It does not take a ring of thieves to accomplish this crime, either; in one recent case, just five credit card skimmers operated by two identity thieves captured the information from over 3,600 cards.

Since the exact origins of a skimmer are often never determined, exact numbers on the prevalence of this crime are hard to pin down, but reliable estimates indicate that skimming from ATMs alone costs consumers $1 billion annually. Cases like the above tend to indicate that this crime is more prevalent than commonly believed.

How to Avoid Being Skimmed

Do you think you can spot a fraudulent credit card reader? Check out these side by side pictures from Kerbs on Security of a real credit card reader and a credit card reader refitted with a credit card skimmer to see just how hard it can be to spot the difference. The skimmer in this example even has a pinhole camera to capture PIN numbers that looks much like a drill hole used to attach a real debit card reader, placed on the underside of the device and out of sight.

So what can you do as a consumer facing realistic looking devices like the above and devices installed within the panels of a gas pump? Here are a few tips.

In addition to following these steps for safe credit and debit card use to avoid becoming a victim of gas pump skimming, make sure that you also regularly check your card balances for unauthorized activity. Alerting the proper authorities and your financial institutions about potential fraud quickly is key to ensuring that skimming thieves are caught.