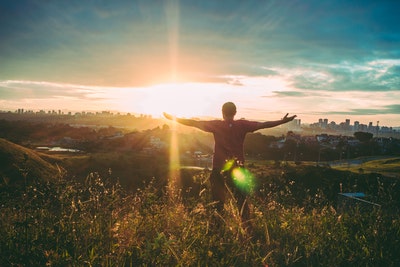 Once there was a good small business lawyer who practiced his profession in a rural town in the Midwest. Whatever he earned from taking clients and cases went to paying for the mortgage, his kids’ education, and a cattle farm he bought from a retiree who left to live in Florida.

Another lawyer who graduated from an Ivy League university sought to make it big in the Big Apple and tried his luck at one of the largest stock brokerage firms on Wall Street.

The lawyer from the Midwest patiently invested in his farm until the cattle grew and multiplied, giving him enough income to hire people and purchase farm equipment.

Soon, his farm was tapped by large corporations as a supplier. This gave him more income from his humble practice in that rural area. The Wall Street hotshot lawyer, however, got caught in the fast plays, bling, and luxury lifestyle of the city.

He took too many debts to amortize an upscale mansion and a red Porsche. When the markets crashed, so did his entire financial foundation.

While this story may be fictional, it sadly happens far too many times in real life not just to lawyers but to people from all walks of life.

Even when people start out strong with an impressive academic background and a high-paying job, the way they live their lives and manage their money leads them to a path of bankruptcy.;

Others who come from a more modest beginning took the longer route, watching where their money went, making good investments to secure their future and that of their family.

It is a proverb that has often been left unheeded. While there is no 100 percent guarantee in business and finance especially in today’s economy, there are principles that remain true and effective.

Now is the time to reiterate the simplicity of finding financial freedom in these four steps:

The first step to financial freedom is to understand the so-called Four Quadrants. Popularized by bestselling author and financial education advocate Robert Kiyosaki, the Four Quadrants describe the cash flow of four types of individuals.

The first quadrant on the top left is called the Employee. Formally educated with a college degree and has a well-paying job, people in this quadrant have a fixed income or source of cash flow.

He or she exchanges his time, knowledge, and skills for a fixed amount of salary paid by the business owner. In general, financial freedom, if any, of the employee depends on the success of the business firm and the generosity of the owner.

As added security, the employee normally contributes to the social security system in order to have a retiree’s pension in the future.

The only challenge is that the employee’s salary is determined by the company that he or she works for. Even the retirement pension depends on the offered rates by the government and how inflation will impact on that pension.

In some cases, retirees do not even get full benefit because the government incurs losses on its investments made using the money paid by social security members, or the vast majority of people who are employees.

The second quadrant on the lower left is for the Self-Employed. These are freelancers on a commission basis as well as the professionals who get paid by the hour for services rendered such as lawyers, accountants, and doctors.

While they generally earn more than the Employee, those who are Self-Employed also bear more responsibility because they have to be personally present to render the service or produce the product.

While they relatively have more time freedom than those employed, the effort they have to put into their career can sometimes be a source of stress and burnout.

The third quadrant on the upper right stands for the Business Owner. Compared to the employee and self-employed, the businessman or businesswoman has more time but also has to develop a set of products and services plus the entire system to sell them. The investment in time and money is also significantly larger. They exercise more control, but they also need to invest a lot of effort into their business.

The fourth quadrant on the lower right is for the Investor, which is seen to be the best quadrant to be in. The investor needs to develop his knowledge and skills in investing, of course.

The difference is that with his expertise, the investor can entice other investors to put in the money to create a fund, for example, to be invested in the currency or stock markets.

It is primarily his or her intelligence that makes success possible. His investing work is usually done online and can be done anywhere and at anytime. Most importantly, the investor focuses on income-generating assets that earn money for him even while he sleeps.

Now, with this basic explanation of the quadrants, ask yourself: What quadrant do I want to belong to?

The next step is to develop a financial plan. The starting point is to determine the lifestyle you want and how much that would cost. For example, if one wants to live in 10-bedroom luxury home with acres of open land, it would take having a goal that runs up to the millions of dollars.

Planning is also about redefining the concept of wealth. Many people define wealth in terms of dollar value when the proper way to do it is to measure it in terms of time.;

If you had a million dollars today and a monthly expense of 20,000 dollars, how long would that money last if you did not work anymore or engage in business?

That one million dollars would only last for a little over four years. Yes, the 20,000 dollars a month sounds big and could afford many luxuries but still, it would not last a lifetime. This is why wealth is measured more importantly in time and not just in dollars.

Choosing one’s lifestyle even up to retirement will dictate the details of the financial plan such as how much one needs to earn and save, how much to invest, and where to invest so that one can attain financial freedom in the future.

During one’s active working years, normally between the ages of 21 to 50, it is advisable to earn as much as one is able.

That is straight advice that has been proven time and again. Now, the key is to know how to earn that money. Most people rely on active income, that is the money they earn as salary by working on a job or tending a business of their own.

These are good ways to earn, however, an even better way is to complement that with passive income.

Passive income typically includes assets that earn money without a person having to work directly on it like a job or business.

For example, buying apartments and putting them out for rent generates passive income for many, many years. Some who understand the stock and currency markets invest their money there and grow their financial assets over time.;

There are many ways to earn passive income, so do the research and choose one that will work best for you.

Lastly, it is important to accept that everything changes including the rules of business and finance. One must keep learning about new trends and developments related to doing business and investments.

The knowledge of the years past may no longer apply five to ten years from now, or even earlier. Constantly, as technology and innovation reshape human society, new ways of earning a living and growing money through active and passive investments will also evolve and grow.

Indeed, these four steps are quite simplified. There are many other vital steps and bits of information to be learned in between. But surely, those who desire financial freedom will always make the best investment of their time to learn how to improve their lives through their jobs, professions, business, or investments.

It is time to choose which quadrant you want to be in, define your wealth and how long you can maintain it, and make efforts to really build a system for generating active and passive income.

By being open to learning, you will make your journey to financial independence a worthwhile and rewarding endeavor.