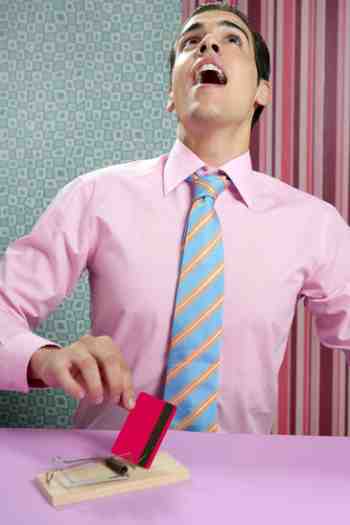 According to the U.S. Census Bureau, in 2009 156 million Americans held one or more credit cards, and that number is projected to hit 160 million by the end of this year. These cards represented $886 billion in debt in 2009, a huge increase since 2000 when credit card debt was estimated at $680 billion. Carrying debt on a credit card is only one of the credit card mistakes we make, but it’s a big one.

The interest that is paid on a credit card is compound interest. Compound interest is the same principle that allows $100 in an IRA today to potentially become $10,000 at retirement. With credit cards, that spells financial disaster, since interest continues to accrue each and every month, especially if the cardholder is only paying the minimum payment, another major credit card mistake.

Although there are valid reasons to use credit cards, such as building a credit history, using purchase protection privileges on major purchases, and keeping credit cards active in case of need, using credit cards for daily purchases and failing to pay off the balance each month costs consumers billions of dollars a year.

In an ideal world, we would only use credit cards in case of emergency. For those who are financially struggling, credit cards are not a way out since the interest rates are higher than virtually any other type of loan available. However, it is still necessary to use credit cards from time to time. When you do use your credit cards, ensure that you aren’t making the following mistakes.

Paying one credit card off with another. When you pay off one card with another, you’re making two mistakes with credit cards. First, you’re usually paying a fee to transfer the balance in addition to the interest rate that is now going to compound on the transferred balance. Second, part of your credit score is determined by your credit usage on each card; carrying a larger balance on one card, or worse, maxing out a card, can lower your score.

Missing payments. Missing payments is one of the big credit card mistakes. A missed payment usually means a fee of $25 or more, a higher annual percentage rate, and a black mark on your credit reports. I like to have electronic statements as well as paper statements for every card sent to me to make sure that I’m not in danger of forgetting when a credit card bill is due.

Thinking you’re getting ahead with a rewards card. According to Consumer Reports, just 56% of Americans pay off their credit cards in full every month. If you’re using a rewards card, you need to pay off your balance each and every month if you don’t want the interest charges that accrue to wipe out the value of the rewards you earn by using the card. Since you need to charge high amounts, generally $500 or more, for the rewards to really make sense, these cards aren’t always the great deal they appear to be.

Using cards with annual fees. I strongly believe that cards that come with annual fees aren’t a good deal for consumers. Credit card companies are already making money from interest and referrals to trusted partners (a prime source of junk mail). It just doesn’t make sense unless you know that the rewards from such a card, like airline miles, will add up more quickly than the cost, or if your credit is damaged and these cards are the only way you can rebuild your credit.

New laws require credit card companies to disclose more information about your credit usage and timeline to payoff than ever before so that you can avoid making credit card mistakes. Take a close look at your next credit card statement to determine where your charges are being made and what they are costing you – then look into making a budget if you can’t pay off the credit card balance every month.