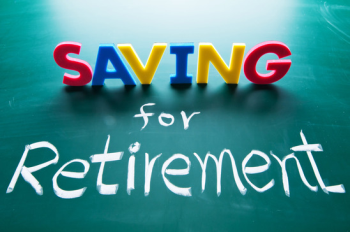 As often as I have been asked, when should I start saving for retirement, over the last several years while working in financial services I can answer it  in five short words, Start As Soon As Possible.

Why You Don’t Want To Wait

In the first example I’m going to show what would happen if you waited to start saving money for your retirement till age 40.  I’m also going to assume that you don’t plan to retire until age 65  which means you will have a total of 25 years to save for retirement.  On top of that I’m going show that you will earn an average return of 8% and will contribute $250 a month for a total of $3000 a year toward your retirement. 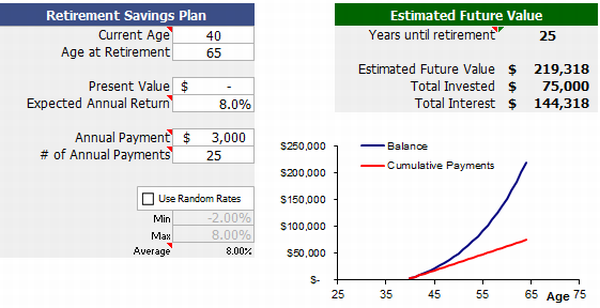 Not bad but let’s see what might have happen if you would have started saving 20 years sooner.

Why Starting Early Makes All The Difference

Now for this example let’s assume that you decide to start saving for retirement at age 20.  I’m also going to assume that you will contribute the same amount of money ( $3000 a year) and that you will still earn an 8% average return on your money as well.  The only thing that will change is that you’ll contribute to your retirement account for 45 years instead of 25 in the previous example.

Let’s see what your retirement would look like now. 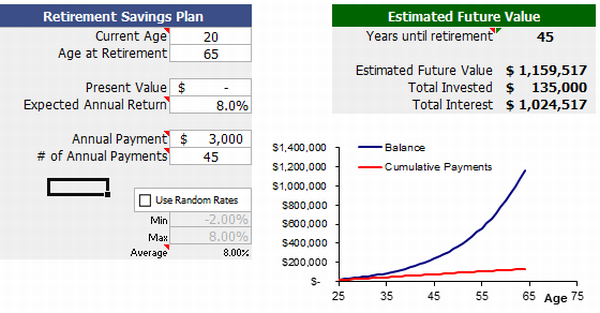 As a result of starting 20 years sooner you would contribute a total of $135,000 to your retirement, and earned over $1 million on the interest of the account for a grand total of $1,159,517.   It’s obvious that starting sooner rather than later is always better but you might be wonder can you still have a good retirement if I get started late?

Can You Catch Up

Now for those of you wondering how much you would need to set aside each month in order to earn the same amount of money as in the second example I went ahead and ran the numbers and here is what I found. 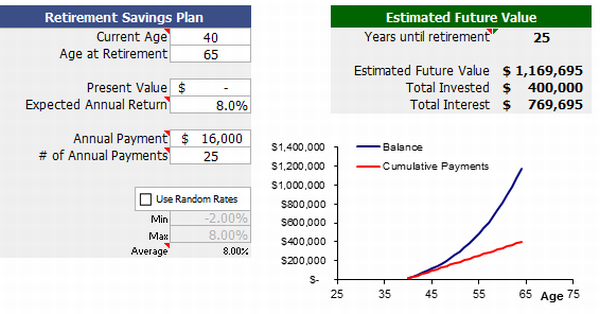 In order to have the same amount of money as the second example you would have to save $16,000 a year instead of $3000.  On top of that it also means you would have to contribute a total of $400,000 over a 25 year period instead of $135,000 as in the second example.  So this has lead me to one important fact, the sooner you start saving for retirement the less expensive it will be.

In order to catch up it’s going to cost you $265,000 more in contributions, something which could have been avoided if you would have started 20 years earlier.  Now don’t get discouraged if you are a latecomer because you still have options.  Below is a few suggestions to consider.

When Should You Start Saving For Retirement

So take this time now to contact your local financial adviser and let them now you are ready to get started saving.   Also take this time to share this article with others and give it a tweet, like, or +1 on  Google.  By doing this you will give the gift of knowledge and hopefully help a few families along the way.

However if you need some help getting started you may want to consider checking out Lending Club.  Lending Club has a great retirement IRA program in fact their average investment returns have been between 5% to 9% as of the writing of this article.  On top of that they offer a No Fee IRA program that doesn’t charge you a penny to invest with.

now and secure your retirement for years to come.

This post was recently featured on the Carnival of Personal Finance by Thirty Six Months.