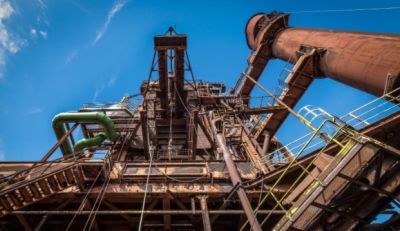 Are you familiar with the role of blast furnaces?

These metallurgical units are used for the production of metals like pig iron, copper, and lead. In order for them to run smoothly, the materials dispensed at the top of the furnace should flow gradually towards the hearth, passing through the stack and bosh.

These units are susceptible to issues like slipping, scaffold formation, channeling, and breakouts. Such problems are both hazardous and detrimental to their productivity. Nowadays, there are numerous pipeline intervention companies, providing repair and installation of hot blast furnaces by using special tools and techniques.

The following guide explains the function of these units, common issues, and repair.

What is a blast furnace?

The blast furnace has the form of a huge vertical shaft, whose purpose is to transform iron ore into pig iron. In order for it to operate efficiently, the materials such as iron ore, limestone, and coke are supposed to flow downwards without any obstructions, in the same way, gases move upwards.

Moreover, the materials take at least six to a maximum of eight hours to travel from the top to the bottom of the blast furnace. In contrast, hot air takes no more than eight seconds to find its way to the top. This unit has multiple zones, each performing a different function.

For instance, the hearth is located at the bottom of the unit, above which there’s a zone called bosh. The stack is the largest section, starting at the bosh and ending at the top of the unit. The top is equipped with a special mechanism for charging the unit with the essential materials.

It’s pre-heated to a temperature of a minimum of 900˚C to 1200˚C owing to the fuel entering through the nozzles. Small-sized blast furnaces have at least twelve nozzles, whereas large models are equipped with as many as forty nozzles.

Furthermore, the bosh is unquestionably the hottest section of the blast furnace, while the hearth is where melted iron builds up and gets removed from the unit through a tap hole. In terms of charging, these units use a two bell charging system, including a small and large bell, between which there is a rod moving vertically.

Once this step is completed a couple of times, the small bell has to close to prevent gas from escaping into the atmosphere. The large bell opens to discharge the material into the furnace, after which the whole process starts from the beginning. Read more about the history, origin, spread, and modern processes of the blast furnace. 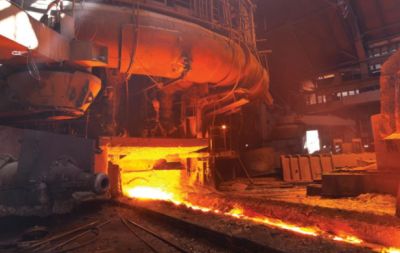 It’s normal for these units to show signs of operation irregularities, which have to be repaired on time in order to prevent severe consequences.

For instance, the phenomenon of furnace hanging and slipping takes place when the material fails to move slowly towards the bottom of the unit but falls rapidly. As a result, space becomes filled with gas, while the material travels quickly towards the hearth.

In the meantime, the hot gases travel rapidly towards the top of the unit, which leads to deterioration of the top section.

Once furnace operators notice any kind of irregular movement of the material, proper measures are supposed to be taken so as to prevent handing and slipping. Bear in mind that such slips are capable of resulting in a frozen unit.

Another common issue with blast furnaces is scaffold formation, referring to the scabs formed on the walls of the unit, reducing the stack’s cross-section area. Such scaffolds occur either near the top of the stack or right above the bosh.

In the event of a high concentration of lime in the slag, the former causes a boost in the melting point of the latter. As a result, slag sticks to the lower walls of the unit, pushing the hot gases towards the central section, which makes scabs solid.

In addition, the presence of scaffoldings impedes the process of material traveling, as well as that of gas flow. The lower the gas flow, the higher the fuel rate. In such cases, blast furnaces run less efficiently and reduce the productivity of the unit.

Channeling is yet another frequent issue, caused by improper distribution of the hot gases traveling to the top of the unit. This type of problem might be caused by a high concentration of liquid slab or iron in the bottom section or an uneven distribution of the material. Similar to scaffold formation, channeling is also capable of minimizing the productivity of the machine.

Ultimately, a breakout might occur any time gas, slag, or iron escapes the unit. A breakout can happen both at the hearth or the bosh of the furnace, but those of liquid iron and slag are considered the most hazardous.

These breakouts occur below the hearth, via the hearth jacket or walls. Iron breakouts are considered the most hazardous, as an explosion might occur when melted iron and water get in touch.

When it comes to a breakout of slag, the issue can be fixed by sealing the hole with the help of fireclay grout, plastic cement, or new bricks. Conversely, an iron breakout requires much more than sealing the hole, such as repairing the entire hearth.

These units should run smoothly in order for metals to be produced.

It’s the only way to avoid hazards!